Lignin has gained a lot of attention as a renewable source of aromatic chemicals and materials. However, due to its heterogeneous nature and complex structure, lignin is a demanding raw material to valorise especially to monomeric or low molecular weight products.

In recent Nordic Wood Biorefinery Conference, lignin depolymerisation and characterisation were named the biggest research challenges for lignin by the audience of over 200 experts. In FRACTION, lignin valorisation is developed through oxidative and reductive depolymerisation to produce renewable alternatives to fossil-based polyurethanes and phenol-formaldehyde resins. This text focuses on how modern lignin characterisation methods are used at VTT to facilitate this task.

FRACTION explores the valorisation of different lignocellulosic feedstocks, like softwood, hardwood and agricultural residues. Lignin in plants is derived mainly from three monolignols, p-coumaryl, coniferyl and sinapyl alcohol, which react through radical reactions to form complex polymer structure giving rise to p-hydroxyphenyl (H), guaiacyl (G) and syringyl (S) units, respectively. The ratio of these units differs from plant species to another, which affects the structure and reactivity of the lignin both during the biomass fractionation and further valorisation. Pyrolysis gas chromatography can reveal the monolignol ratio along with other components in the lignin samples. Furthermore, the total methoxy group content can be analysed by headspace gas chromatography. In general, softwood lignins consist mainly of guaiacyl units, while hardwoods and non-wood plant biomass usually contain more syringyl than guaiacyl units. P-hydroxyphenyl units constitute only a few percentages of monolignols in native lignin being highest in non-wood plant biomass.

The three monolignols differ only based on the amount of methoxy groups, but this leads to an important difference in the reactivity of these units. The interunit linkages form between the hydroxyl groups as well as 5- and β-positions in the carbon backbone. The methoxy substitution prevents bond formation in the aromatic ring and increases the amount of bonds between hydroxyl groups and β-position, such as the β-O-4 bond. These bonds can be distinguished by multidimensional NMR techniques, such as HSQC NMR method, which have greatly increased the understanding of lignin structure in the last decades. A method developed at VTT combines the data from the gas chromatographic analyses with the 2D-NMR data to calculate the concentration of the interunit linkages in the lignin samples, which gives important insight into the reactivity of the lignin.

The most common bond in native lignin is the β-O-4, which is more abundant in hardwood and grasses than in softwood. The C-O bonds are rather easily cleaved during delignification of lignocellulose, while C-C bonds are more recalcitrant. Therefore, the C-O bonds can be considered the primary target for the depolymerisation. The challenge arises from the swift repolymerisation of the released lignin fragments, which increases the amount of strong C-C bonds already during the lignocellulose fractionation and isolation of lignin. The fractionation method greatly affects the structure of the isolated lignin. For instance, Kraft lignin, isolated from the Kraft pulping process, contains mainly C-C bonds which makes it a very difficult material to depolymerise. In FRACTION, the lignocellulose fractionation is carried out under considerably milder conditions using aqueous organic solvent, which gives lignins that are closer to native lignin and thus more easily depolymerised, and moreover, sulfur-free.

During the lignin depolymerisation, the released fragments need to be stabilised to prevent repolymerisation. In FRACTION, VTT develops catalysts for depolymerisation under reductive conditions to convert the reactive species into stable monomers. The extent of the depolymerisation is investigated by the change in molecular weight of the product compared to the isolated lignin using size exclusion chromatography. Furthermore, the monomers formed are identified and quantified using gas chromatography coupled with mass spectrometry. The changes in the structure of the lignin can be identified with NMR techniques, like P-NMR, which elucidates the amount and nature of hydroxyl groups with the aid of a phosphorous reagent. By combining the pieces of the puzzle, we can better understand the lignin and how it can be further valorised in FRACTION concept. 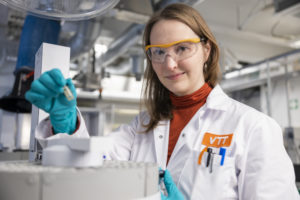